The Innu community of Mashteuiatsh hosted a First Nations Regional Economic Circle on June 15 and 16, 2022. This was the very first event stemming from the Grand Economic Circle of Indigenous Peoples and Quebec, which was held last November in Montreal.

The event’s organizing committee worked very hard to offer participants a varied program, the main themes of which were addressed in the form of panel discussions. Indigenous affirmation and rights, partnerships and Indigenous tourism and its development are just some of the topics that were addressed by the various invited panelists. All panels were recorded and can be viewed directly on the Youtube channel of the Grand Economic Circle.

On the evening of June 15th, participants were invited to go to the Village historique (historic village) de Val-Jalbert for a thematic dinner focused on renewable energies. This site is also where the community of Mashteuiatsh, in partnership with the RCMs of Domaine-du-Roy and Maria-Chapdelaine as well as the municipality of Chambord, built a mini hydroelectric power plant powered by the magnificent waterfall of the Ouiatchouan River. The perfect integration of this mini-power plant into the site of the historic village allowed participants to see that it is possible to carry out an economic development project while respecting the surrounding environment. 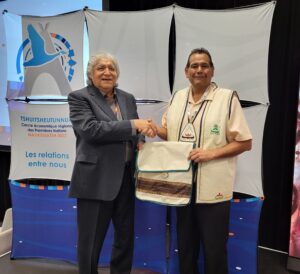 The event provided an opportunity for a few companies to make commitments, as was the case for the Conseil du patronat du Québec, Pomerleau and Rio Tinto. Some companies that had “committed” to the Grand Economic Circle in Montreal took advantage of this opportunity to further explain the nature of their commitment. This was particularly the case for Hydro-Québec, which announced, on June 15th, $5 million in financial support over five years for the FNQLEDC, which will allow us to improve our women entrepreneurship support services. The Minister Responsible for Indigenous Affairs, Mr. Ian Lafrenière, announced $300,000 in funding over three years for the FNQLEDC for the establishment of a follow-up structure for the Grand Economic Circle. Thanks to this funding, we will be able to hire a first resource who will be assigned full-time to monitoring the commitments made as part of the Grand Economic Circle who will also be tasked with seeking out new ones.

Announcement of the next Circle

At the end of the event, Chief Gilbert Dominique passed the Circle’s torch to Dr. Ted Moses, President of the Secretariat to the Cree Nation Abitibi-Témiscamingue Economic Alliance, who announced that the next Regional Economic Circle will be held in Val-d’Or on November 14, 15 and 16, 2022. In the meantime, to make sure we can keep you posted, please follow the Grand Economic Circle Facebook page.

For more news concerning the events and activities in which the FNQLEDC team takes part, please check out our website.