A Sugar Bush Under Construction for the Micmac Nation of Gespeg

The Micmac Nation of Gespeg is entering the maple syrup industry. In operation since the spring of 2021, the state-of-the-art sugar bush will allow the Nation to produce and sell maple syrup locally.

To carry out this project, the Micmac Nation of Gespeg received a grant of $196,540 from Canada Economic Development for Quebec Regions. In total, the project will represent an investment of over half a million dollars. This project had been planned for several years, but for various reasons, including the fact that it was difficult to access the sugar bush site, it had been set aside until a solution could be identified. Now that a financially affordable access solution has been found, the project can move forward.

The sugar bush is currently under construction on the site, which covers an area of ​​32 hectares (with a potential for 35 hectares). The land is located about 5 km north of the Nation’s administrative building. According to Chief Terry Shaw, the first phase of the project is expected to tap between 2,000 and 3,000 maple trees in the spring of 2021. In about two years, the site should have a capacity of 7,000 to 10,000 taps. 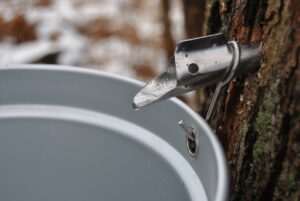 As a first step, the Nation wishes to focus only on a first processing of maple syrup but is not ruling out the idea of embarking on a second and third processing if there are interesting market opportunities to be seized. The sugar bush will therefore be exclusively a maple syrup production site and will not include facilities to receive visitors, as traditional sugar shacks do. The maple syrup is expected to be sold locally, in five-litre bottles. However, it is possible that linkages could be created between the sugar bush and the Micmac interpretation site of Gespeg, which would allow for the development of certain services intended for the public.

This project aims to diversify the Nation’s economy, which is mainly focused on the fishing and tourism industries, and to create jobs for its members. Other projects are being considered but in the current context of the COVID-19 pandemic that has come with its share of economic uncertainties, the Nation wishes to remain cautious and responsible in terms of how its investments are made. Without being completely set aside, these projects are therefore being slowed while the context improves.