Economic Development: A Tool for Reconciliation and Collaboration With First Nations

On February 11 and 23, 2021, the Assembly of First Nations Québec-Labrador (AFNQL) facilitated two virtual roundtables with the theme “Economic development as a safeguard against racism and discrimination toward the First Nations”. Following is a summary of the highlights from these roundtables.

The roundtables were facilitated by the Chief of the Assembly of First Nations Québec-Labrador (AFNQL) Ghislain Picard and are a part of a series of webinars whose objective is to initiate reflection with various “allies” on racism and discrimination toward Québec First Nations. The roundtables were able to rely on the participation of Indigenous and non-Indigenous representatives from Québec’s business sector.

The main topic was discussed through three themes: improvement of social conditions and reduction of inequalities; the role of First Nations in major projects; and the future of economic alliances between Indigenous and non-Indigenous people.

Before going to the heart of the topic, an overview of First Nations economic development was provided, despite the difficulty with this exercise due to variability of data. However, a trend emerged from this: diversity because there are as many situations as there are communities. These situations are influenced by:

First Nations businesses are particularly present in the following areas:

It is also important to mention certain specificities of the First Nations economic model:

Improvement of social conditions and reduction of inequalities

There are numerous obstacles to First Nations economic development. Among these we find:

To overcome these obstacles and ensure success, Indigenous businesses must be capable of identifying business opportunities, know how to communicate, and construct their identity and values. This also implies openness, training, and collaboration of stakeholders.

To a different degree, the social economy model (whose values are like those of First Nations) can constitute a solution to improve social conditions and reduce inequalities for First Nations, as well as being a tool for self‑determination. In fact, this model is based on groups of people or collectivities that have confidence in their knowledge to meet local or broader needs and contribute to the development of the territory. Social economy can also be a means of bringing people together because of the Indigenous and non-Indigenous poles sharing common values and missions.

The involvement of First Nations in major projects largely depends on the willingness and openness of governments and organizations of integrating them in economic and territorial development measures. These rapprochements are indeed possible, as shown by the following example:

The willingness of current governments to accelerate infrastructure projects constitute an opportunity not to be missed for the integration of Indigenous businesses in the process, investment in infrastructure to develop their skills and therefore allowing them to compete on an equal basis against other economic actors.

Future of economic alliances between Indigenous and non-Indigenous peoples

Economic alliances with First Nations can be in various forms and are mainly implemented in natural resources. There are examples demonstrating the interest in and relevance of these alliances. Such is the case with the historic agreement, dubbed as the Peace of the Braves, concluded between Québec and the Crees in 2002 to pursue economic development on the James Bay territory and contribute to the fulfilment of the Cree Nation.

Many solutions to ensure economic alliances between Indigenous and non-Indigenous peoples can be proposed:

Although a lot is left to be done, the key to success resides in the recognition of the contribution, collaboration, reciprocity, and openness of participants (Indigenous and non-Indigenous). It is therefore our duty to build a common future together for prosperity and cooperation.

To watch the roundtables again, we invite you to view the replays on the AFNQL Facebook page: In English | In French.

To consult other articles on First Nations economic development, we invite you to consult our blog. 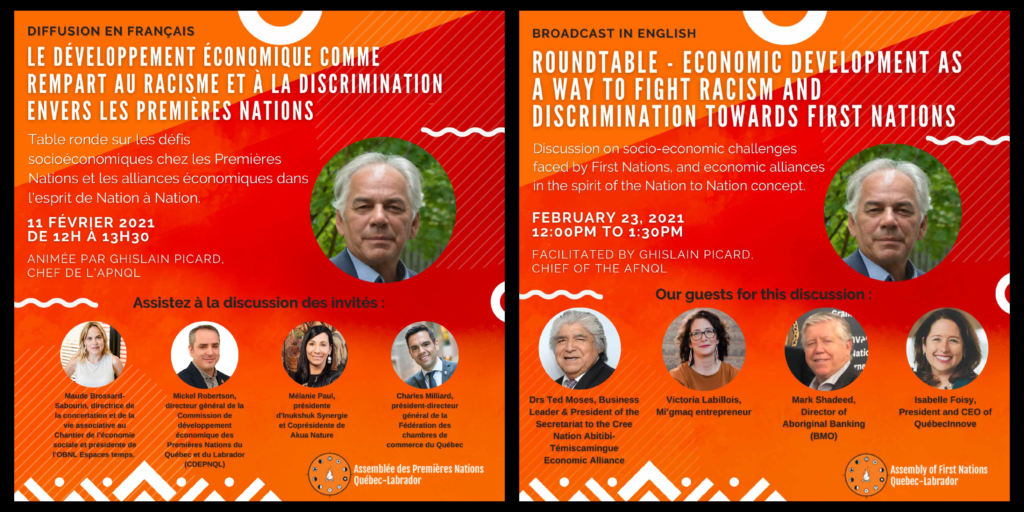