On October 15th, the FNQLEDC officially launched its fall training season by presenting a conference entitled “The impacts of COVID-19 on businesses and economic recovery”, which was presented by Mr. René Vézina, a columnist and blogger specialized in the economy. The following is a summary of the highlights of this conference.

From the outset, Mr. Vézina made it clear that it is impossible to make reliable forecasts because the pandemic situation is constantly evolving. However, according to him, there are some certainties that determine the current economy, including low interest rates and inflation, large deficits to be expected for governments, which are currently in “support” mode, and a border with the United States, which should remain closed for a long time to come. 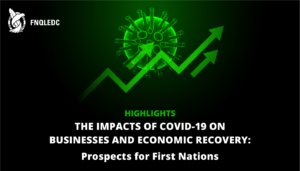 He also mentioned that, in all crisis situations, there is what experts refer to as the black swan, which is an unforeseen factor that derails all economic forecasts. In the current crisis, one of the unforeseen factors is undoubtedly the holding of the American elections. Indeed, the possible contestation of the election result could create uncertainty and tensions that could have repercussions on the economy. In addition, in his opinion, the current context has also amplified or created certain phenomena, which will have impacts on the economy in the years to come. These include the rise in popularity of e-commerce, telecommuting and a significant increase in residential construction and infrastructure projects, which will be one of the driving forces in terms of economic recovery.

The economy of the First Nations communities in Quebec is marked by the significant presence of businesses that are active in five business sectors: construction, tourism, mining, forestry and local commerce. Once again, while keeping in mind that making forecasts that are 100% reliable is not possible, Mr. Vézina proceeded to make certain hypotheses about the future of each of these sectors.

Positive factors on which to build

Quebec is a rapidly aging society, with the exception of the First Nations population. In fact, among First Nations, the population is much younger (the average age is 32 years, which is ten years younger than for the rest of Quebec) and its growth is much greater than for the rest of the Canadian population. This is a strength on which communities must build that could make it possible to set in motion a wide range of development projects.

Added to this is the fact that First Nations people are increasingly trained and their participation in major projects is increasingly significant. The following are a few additional positive factors: the fact that the global economy is recovering slowly, but in a fairly stable environment, the growing demand for wood and metals, the increased support from governments and a vaccine that could be available earlier than expected.

As in any situation, it will also be necessary to deal with negative factors, such as economic growth that varies greatly from one community to another and a significant infrastructure deficit among the First Nations, particularly in terms of roads, schools, etc. Mr. Vézina also mentioned that the ignorance and misunderstanding of southern Quebec about what is happening in the north could undermine recovery. In his opinion, to improve their situation, the people of Quebec must learn to work with First Nations.

In conclusion, Mr. Vézina made a point of saying that he believes that the people, communities and groups who win or do well are those who are able to anticipate what is to come and position themselves so that they can take advantage of the next opportunity related to recovery.

To read other articles related to First Nations economic development, we invite you to consult our blog.