Articles and chronicles
Back to articles
Share this article
Category : Social Economy

The first edition of the Social Economy Gathering brought together actors and partners in social economy.  The objective was to enhance and strengthen the movement, especially the companies and ecosystem that support them. This event highlighted how social economy innovates and offers new tools and solutions that facilitate its development.  Over 200 actors, partners, and young entrepreneurs were in attendance.

Twenty-two poles in social economy participated. Three of them were Indigenous poles, including the First Nations FNQLEDC pole, the Cree pole, and the Inuit Pole. The remaining 19 poles were from various regions of Quebec City.

Mrs. Malek tells me that she took part in a challenge, which led her and the participants to group together by sector (agriculture, housing, health, etc.). They had to come up with a sentence that described their common mission. This activity allowed her to network, to feel supported by other entrepreneurs who aspired to the same social mission as herself. 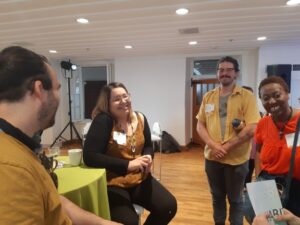 She also took part in a second sharing and situational exercise on governance and management.  She was able to learn how social economy actors strengthen their entrepreneurial community capacities, as well as discover the gaps, challenges, and issues of other entrepreneurs in attendance.

Our social economy officer, Ms. Annick Tremblay, and Marie Hanquez, our social economy advisor, took part in the event to represent the First Nations hub.  They participated in various workshops and exchanges with different actors in the field.

The first day was launched by Lucie Lecours, Minister for the Economy and Member of the National Assembly for Les Plaines. Through panels and workshops, participants were able to equip themselves on topics such as procurement policies, circular economy, collective takeover, digital shift, crowdfunding, and much more.

On the second day, our social economy advisor accompanied two young people who participated in one of the editions of the FNQLEDC StartUP Nations. This pathway allows young Indigenous entrepreneurs to be accompanied in the different stages of a collective entrepreneurial endeavor within their community or in an urban environment.

This second day of activities brought together about 60 young collective entrepreneurs and supporters of the SISMIC program. SiSMIC, the only ideation and incubation path for collective enterprises offered to young people aged 18-35 throughout Quebec and with Indigenous communities, offers strategies to strengthen their capacity to act so that they can respond themselves to the challenges of their living environment through the creation of collective enterprises, thus contributing to the social and economic wealth of the territories.

This event allowed a sharing of experiences, projects, challenges; multiple exchanges on the issues that affect entrepreneurs and their motivations. The young SISMIC collective entrepreneurs took advantage of the day to enrich each other. They were also able to take advantage of the presence of ecosystem specialists to support them in their reflections, particularly in terms of governance, financing, management, and on the different strategies or means of development. Undoubtedly, young collective entrepreneurs have a role to play in identifying solutions to the needs of their territories and SISMIC is more than ever a solution to take them from idea to action.

To conclude this event, a scholarship ceremony was held to highlight and encourage certain youth projects. A dozen recipients were able to leave with a scholarship that will allow them to advance in their entrepreneurial project.  We sincerely hope that this first edition was able to inspire young entrepreneurs and equip them for the completion of their projects.

To consult other company profiles, we invite you to visit our blog.