Articles and chronicles
Back to articles
Share this article
Category : Social Economy 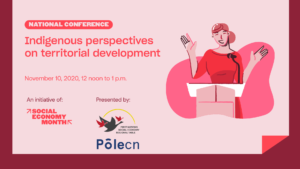 As part of Social Economy Month 2020, the First Nations Social Economy Regional Table (coordinated by the FNQLEDC) and the Pôle des entreprises d’économie sociale de la Capitale-Nationale presented the “Indigenous Perspectives on Territorial Development” national conference. Here is a summary of the highlights of this conference.

Generally speaking, Indigenous peoples form culturally distinct societies and communities. The lands on which they live and the natural resources on which they depend are linked to their identity, culture and economic livelihood, as well as their material and spiritual well-being. Human development is reflected in the well-being of the community, which revolves around the values ​​of respect for nature, the environment and social organization associated with the enjoyment of fundamental rights. However, Indigenous peoples have been subjected to radical upheavals in the name of economic development for centuries, and yet they have not reaped the benefits of this development.

In South America, the concept of “Buen Vivir” (which means “living well” in English) is the foundation of the way of life of many indigenous peoples. It is both a way of relating to others and a way of relating to the environment. In Canada, First Nations cultures are characterized by their connection to the land as well as by the transmission of their knowledge and skills from generation to generation. They have long favoured approaches to economic organization that are based on cooperation.

Based on these assumptions, our speakers, Karine Awashish and Dan Furukawa Marques (see their biographies), provided a portrait of the lessons to be learned from these models in terms of socioeconomic and territorial development and relationship to the environment.

The approach of the Indigenous peoples in Quebec

The identity of the First Nations is rooted in land and culture as a driving force for the transmission, learning and safeguarding of knowledge and culture (languages, values, and traditions). According to Karine Awashish, these different elements influence their socioeconomic development by being associated with issues and opportunities such as:

In the past, the economic model was based on nature and focused on the interrelationship between ecosystems, as well as respect for the concept of circularity and equal distribution of resources. Cooperation was also essential, and success was not linked to the accumulation of material goods. Today, economic development among Indigenous people emphasizes the importance of the common and collective good, while being rooted in the land and culture. It is based on the principles of participation, cooperation and empowerment.

The socioeconomic development of First Nations is therefore strongly influenced by several issues, such as:

The approach of the Indigenous peoples of the South: “Buen vivir”

Since the 1980s, developing countries have come under strong pressure to move towards a neoliberal model of economic growth, based on the eurocentrism of developed countries. This model is now reflected in the massive exploitation of natural resources in several countries of the South. This conception of development based on the accumulation of material wealth to the detriment of the environment and the human-being is inconceivable for the Indigenous cultures of the South.

According to Dan Furukawa Marques, these different worldviews (cosmovisions) made it possible to build an alternative model of civilization, which is how the cosmovision of “Buen vivir” (or “Sumak Kawsay” in Quechua) was born. It is based on many interrelated factors:

The common points of these two approaches are the harmonious relationship between human beings and nature, a community life based on mutual aid, shared responsibilities and collective production, and a distribution of wealth according to the needs of the members of the community. In addition, the search for profit is not an end in itself in both approaches, but a means to serve the collective interest and the community.

To conclude, this is where these approaches relate to the concept of the social economy (or collective entrepreneurship). They constitute a tool of socio-economic self-determination for First Nations which makes it possible to meet the needs of its members, to fight against poverty and social exclusion, and to unite their vision and their traditional knowledge.

To learn more about collective entrepreneurship (or social economy), visit the dedicated page (in French only) on the website of the Ministère de l’Économie et de l’Innovation.

Further information on the social economy, we invite you to visit our social economy section and to consult our tools on this subject.