An enterprising Mohawk couple from Kahnawake have the wind in their sails because they dared to go into business by sharing their passion for cooking.

Rowy’s was created in the fall of 2018. This Kahnawake company was founded by Mr. Austin Lazare. He shares a workspace with his wife Kahente McGregor, owner of The Butter End Cakery. They are both co-owners of their new store The Cakery Bakery Brinery.

The enterprise is 100% Mohawk operated

As for The Butter End Cakery, it makes gourmet cakes, homemade pies and the best cinnamon buns. According to Mr. Lazare, “They are seriously to die for.” All products are made from scratch, using only the best ingredients. One of its best-selling products is “Just Because Cakes”, a gourmet cake packaged in a small single-serving container sold at a very affordable price. 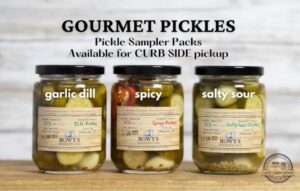 The Mohawk couple likes to partake in culinary experiments, and then proceed to sell them when the results of their creations end up being delicious. “We love making new recipes. Our most amusing creations are definitely the lemon pickle salsa, candy-covered pickles, and margarita bars topped with Rowy’s candied jalapenos.”

Pickling and preserving are activities that Mr. Lazare had wanted to try since he was a child. His cousin made the best pickled green tomatoes, so he wondered what else he could do. A few years ago, he found a book on home canning. He read it through and began researching it over the next few months. Once he became more confident, he tried making spicy pickled beans. It seemed like a simple and rather fun idea for his first creation.

To his surprise, they turned out amazing, full of flavour and very crispy. His son was a year and a half at the time, and just like him, he loves spicy food. He gave his son a single bean to taste but, unable to stop himself, he devoured the whole jar. It was then he knew that it would be a success! Indeed, he has always used the same recipe ever since.

Two months passed after his first batch of beans, and the only people who had tasted them were close friends and family. He approached the owner of a local store just before Christmas 2018 to sell his products. She accepted without hesitation. He therefore brought her a crate of beans. A little later in the day, the owner contacted him saying that everything had been sold in half an hour. After that, he knew his products would be popular and he decided to go all out about a year later.

The two Mohawk entrepreneurs intend to innovate and test many other creations in 2022, while focusing on the development of the best possible products. Some projects include mixing their different products together like pickle cake and cupcakes, for example. They also plan to make limited batches of seasonal and special products. These delicious products are now on sale in approximately 25 stores in the Quebec region. Their biggest goal is to further expand their points of sale in 2022.

Austin is now well-known in Kahnawake and referred to as the pickle man! “My pickles are the best around,” he says, “and I work hard to keep it that way.” He added that his professional training in entrepreneurship, which he had received a few years before creating Rowy’s, served him well. His ambition was to run his own business, and thanks to his studies, he was able to make his entrepreneurial dream come true.

In conclusion, we wanted to take this opportunity to highlight the work and innovation of these two Indigenous entrepreneurs. We wish them great success and for them to successfully come up with other delicious culinary ideas for us to discover and enjoy.

To consult other portraits of inspiring entrepreneurs, we invite you to consult our blog regularly.