Investing in an Industry with Strong Economic Potential

Since 2016, the Listuguj Mi’gmaq Government has been a shareholder of Zenabis Global Inc., which has cannabis production facilities that are located near the community. Before making the decision to invest in this industry, several steps were taken which are covered in this article.

Initially, the community was not particularly interested in investing in this industry. It all began at a dinner where the Chief had a conversation with a representative from Zenabis Global Inc., who introduced him to his company. This presentation allowed him to see the full potential of this industry, which is both growing and controversial. There was therefore a lot of interest because investing in this industry had the potential to generate economic benefits for the community and create jobs for its members. All that remained was to find the right company to invest in.

The community of Listuguj quickly indicated that it was interested in the cannabis industry and other companies subsequently submitted investment proposals to the community. Each proposal came with different repercussions for the community. However, the proposal submitted by Zenabis Global Inc. seemed the most interesting. For this reason, Listuguj’s Economic Development Manager, Delphine Metallic, visited the company’s facilities in Atholville, New Brunswick. She was very impressed by the premises, which cover an area equivalent to approximately 400,000 square feet. At the time, the facilities were still under construction and there was only cement, but the plans gave her an idea of ​​what the premises would look like once completed.

Following this visit and after consulting with many people to help them choose among all the proposals received, they decided to invest in Zenabis Global Inc., which is headquartered in British Columbia. This choice was motivated by the fact that it is a local company, among other things. Indeed, from the first exchanges, the managers of Zenabis Global Inc. were very open and collaborative and, most importantly, they recognized from the outset that their facilities are in Mi’gmaq territory. They also agreed that the community could be involved at some level in the decision-making process of the company. In short, a partnership was possible while respecting the values ​​and culture of the community. 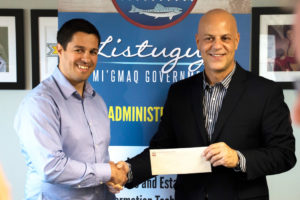 Before moving forward, presenting the project to the community members was crucial. Several presentations were therefore made to explain the nature of the investment, the expected impacts, etc. Representatives from the headquarters of Zenabis Global Inc. also came to present the enterprise. In general, the population was impressed by this project and the majority voted in favour of the investment.

The company has just completed its first year of operations, so we cannot yet talk about significant monetary benefits for the community. However, this investment has created jobs and training opportunities for the population of Listuguj. Indeed, 30 of the 300 employees currently working at Atholville’s facilities come from Listuguj. This means that about 10% of the company’s employees are Mi’gmaq, which is a very positive impact. And since the cannabis industry is growing rapidly, we can assume that this trend will continue in the coming years!

Further information on the Listuguj community can be found at listuguj.ca.